Share this:
Bringing The Continental Free Trade Area About 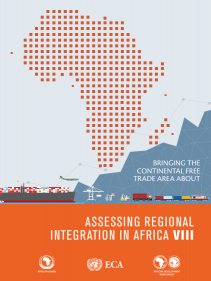 The establishment of the Continental Free Trade Area (CFTA) is a major milestone in the long march of African integration. As foreseen in the Treaty Establishing the African Economic Community (commonly known as the Abuja Treaty), which entered into force in 1994, the integration process is to culminate in the African Economic Community. A review of the current status of Africa’s economic integration is the subject of Chapter 2.

The CFTA aspires to liberalize trade between African countries across the continent and to build on the considerable successes already achieved within Africa’s regional economic communities (RECs). By doing so, the CFTA is set to facilitate intra-African trade; foster regional value chains that can facilitate integration into the global economy; and energize industrialization, competitiveness and innovation—and thereby contribute to African economic and social progress and development. These issues have been the focus of several earlier editions of the Assessing Regional Integration in Africa (ARIA) series, notably ARIA V, which made the case for a CFTA.

3. Conceptual Issues in the Political Economy of Integration and the CFTA
Download Full Chapter

4. Revisiting the Case for the CFTA
Download Full Chapter

5. A Win-Win Approach to the CFTA
Download Full Chapter

7. Financing for Bringing the CFTA About
Download Full Chapter