The COVID-19 pandemic led to a great disruption of lives and livelihoods, and therefore a substantial economic shock globally. This was especially true for the countries of Africa, many of which had very low institutional capacity to deal with a sudden public health crisis, and low budgetary capacity to fund a pandemic recovery stimulus thereafter.

But one way of thinking about a recovery from such a sudden and multidimensional crisis is to treat it like a model, or bridge, to building resilience for the future effects of climate change. The impacts of climate change are expected to be much more considerable (albeit unfolding at a slower pace) and certainly more long-lasting. Only a small share of the fiscal stimulus packages is explicitly green. Yet recent global economic studies suggest that green spending can secure both greater growth and a greener future.

Could stimulus packages be used to build long-term resilience to climate change and to open out a new and sustainable, “green” pathway to growth? Key common principles that define and govern the “green growth” approach to development include: sustained economic growth through resource-use efficiency; climate change response through adaptation and mitigation; the creation of decent green jobs; and human well-being and social inclusiveness. The specific policy options required for such an approach are addressed in the Global Center on Adaptation (GCA) Africa State and Trends in Adaptation Report 2021 (STAT21) https://gca.org/reports/state-and-trends-in-adaptation-report-2021/.

A specific chapter of STA21 on possibilities for a Covid-19 recovery, highlights proposals for various kinds of green economic activity and job creation for four African countries (the Democratic Republic of Congo, the Arab Republic of Egypt, the Republic of Kenya, and South Africa) commissioned by the United Nations Economic Commission for Africa, based on an Intervention & Investment Impact Model (I3M) developed by the economics consultancy Vivid Economics and the Oxford University Economic Recovery Project (OUERP).

Among the economic activities that the I3M modelling indicated as presenting a high potential for levering green economic growth, two were prominent in all country case studies: agriculture and natural capital services. Agriculture is a dominant sector in the economies of most African countries, accounting for 30–40 percent of GDP and providing jobs for over two-thirds of Africa’s population. A focus on natural capital has the potential to bring economic, social and environmental benefits, creating jobs rapidly and safeguarding communities against climate change.

It follows, therefore, that the sustainable use of natural capital, particularly to address vast adaptation needs through nature-based solutions (NbS), and the adaptation of the agricultural sector to cope with current and future climate change impacts are vital for Africa’s recovery and for resilient green economic growth. The STA21 chapter on a green recovery reviews the opportunities and recommendations for green economic growth in these sectors developed by OUERP and its partners, and illustrated by four case studies based on the specific economic situation and geophysical characteristics of each country. (The detailed study can be found here.)

For instance, almost half of the workforce of Kenya is employed either in agriculture (40%) or tourism (8.8%) and together these activities contribute to over 40% of GDP: that is, they count highly for both economic growth and job creation. The country study recommends that Kenya should prioritize NbS through programs such as agroforestry, resilient seed and irrigation programs, and reforestation. Such investments have the potential to reinvigorate the travel and tourism industry, which was badly hit by the pandemic, by creating jobs rapidly and safeguarding communities against climate change.

The same approach suggested for Kenya would also work in South Africa, with some additional sector focuses specific to the country, such as the restoration of wetlands and mangroves and the development of resilience and diversity in the farming system by the introduction of vertical ocean farming. Figure 1, focussing on Kenya, shows the multiple benefits captured by the modelling of green spending over spending of a more traditional type.

Figure 1. Job and Gross Value Added (GVA) impacts of a subset of green spending policies (average) focused on adaptation and resilience, compared to traditional spending measures in the Republic of Kenya. All modelled policies. 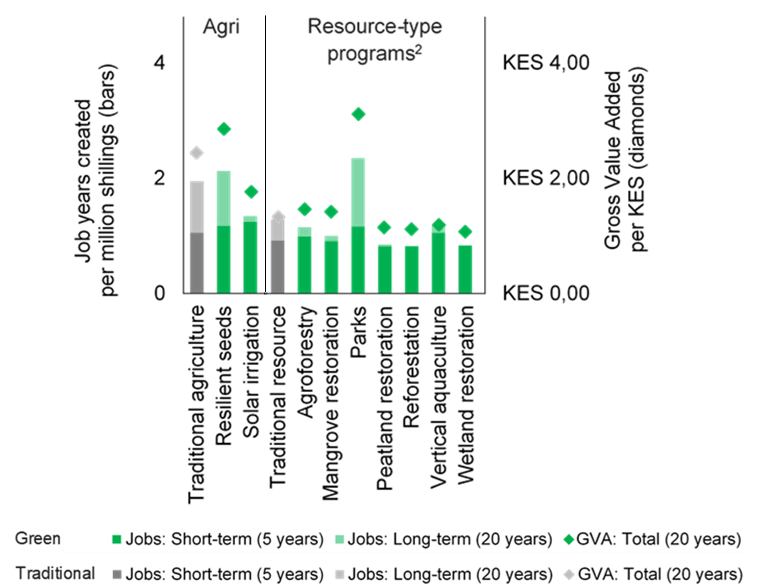 In Egypt, meanwhile, the study finds that agriculture is highly concentrated in the Nile basic area, which is highly vulnerable to climate change impacts. There, capital-heavy investments in in sustainable large-scale projects (such as desalination plants) to bolster water supply and increase the circularity of water in intensely farmed areas should be complemented with improvements in micro-level irrigation efficiency and solar-powered irrigation. Some ventures can be funded by green bonds; indeed, in September 2020 the Egyptian government issued $750 million in such bonds, of which $500 million was used for funding five key green projects.

Figure 2: Job and Gross Value Added (GVA) impacts of a subset of green spending focused on adaptation and resilience, compared to traditional spending, in the Arab Republic of Egypt. All modelled policies.

As these case studies show, under the broad policy orientation of green growth there is considerable room for the generation of particular portfolios of policy options tailored to each case. The STA21 report argues that the deployment of such stimulus packages, supplemented by the provision of concessional finance by international partners, including foreign governments and multilateral organizations, is imperative for a successful COVID-19 recovery for Africa and also to significantly reshape the economic, social and environmental future of the continent.