AFRI-RES is an Africa-based networked centre of technical competence and excellence with the overall objective to strengthen the capacity of African institutions (including national governments, river basin organizations, Regional Economic Communities, power pools, among others) as well as the private sector (project developers and financiers) to plan, design, and implement infrastructure investments that are resilient to climate variability and change in selected sectors

The reports of the joint World Bank and ECA studies on Enhancing the Climate Resilience of Africa’s Infrastructure[1] (ECRAI) found that failure to integrate climate change in the planning and design of power and water infrastructure could entail, in the driest climate scenarios, losses of hydropower revenues anywhere between 5 and 60 percent (depending on the basin), and increases in consumer expenditure for energy up to 3 times the corresponding baseline values. In the wettest climate scenarios, business-as-usual infrastructure development could lead to foregone revenues in the range of 15 to 130 percent of the baseline.  In irrigation, the largest loss in revenue is in the 10 to 20 percent range for most basins. In wet scenarios, the largest foregone gains are in the range of 1 to 4 percent, with the exception of the Volta basin, where they are estimated to be one order of magnitude higher (ten times the baseline level). In the transport sector, climate change is likely to lead to a shortening of road rehabilitation life-cycle, which may entail steep increases in maintenance and periodic rehabilitation costs. In the worst climate scenarios, the stress imposed on the roads by precipitation can lead to rehabilitation costs 10 times higher (compared to historical climate conditions); stress imposed by flooding can lead to a 17 times increase. It is therefore clear that the trillions of dollars needed to close Africa’s huge infrastructure gap is at risk from climate change and variability and need safeguarding.

A central function of AFRI-RES will be to facilitate interaction between policymakers, financiers, project developers, and scientific and engineering experts in order to develop and mainstream new practices that deliver climate-resilient infrastructure in Africa. The scope of the work of the facility would thus span different sectors and different stages of the planning and project development process.

In supporting African institutions and the private sector to strengthen their capacity to plan, design, and implement infrastructure investments that are resilient to climate variability and change in selected sectors, AFRI-RES will deliver on the following: 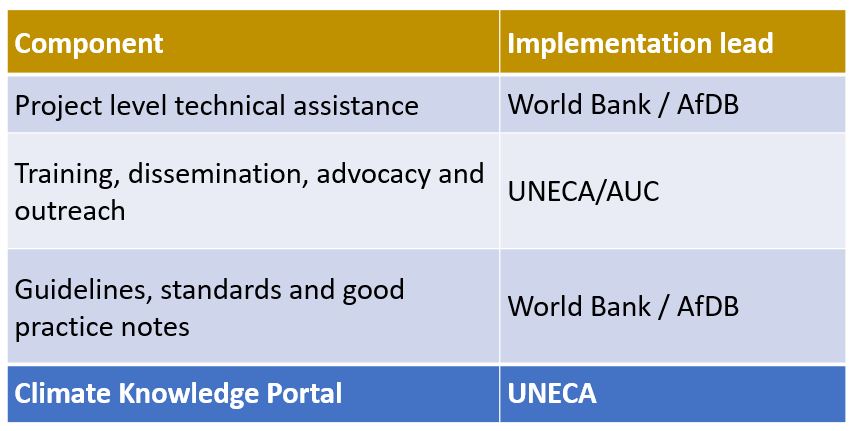 The components above will be delivered through the following activities: 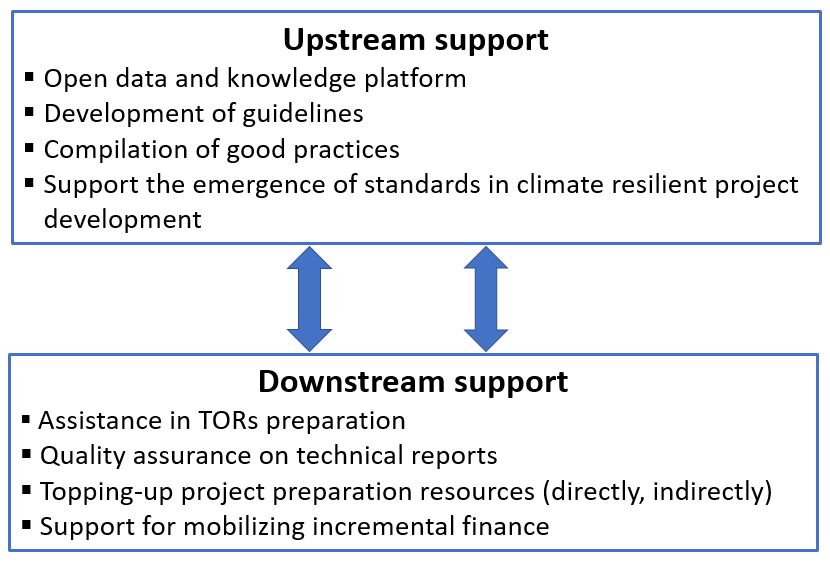 There are four main reasons why AFRI-RES could have transformational impacts on Africa’s resilience to climate change and is complementary to other related initiatives underway in the region.

[1] Two studies have been produced: one on the power and water sectors and one on the roads and bridges sector (Cervigni et al, 2015). The reports of these studies are accessible online at: https://openknowledge.worldbank.org/handle/10986/21875 and http://documents.worldbank.org/curated/en/270671478809724744/pdf/110137-WP-PUBLIC-ECRAI-Transport-CLEAN-WEB.pdf