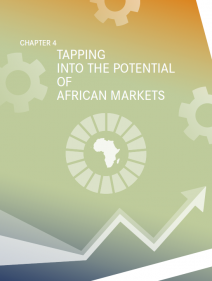 Download Full Chapter
TAPPING INTO THE POTENTIAL OF AFRICAN MARKETS

In other parts of the world, financial markets (also known as “capital markets”) complement bank finance as another source of financing to the private sector. But in Africa, except in South Africa, financial markets are small and undeveloped, largely dominated by commer­cial banks, with few investment banks and underdeveloped capital markets. Some 28 African countries have stock exchanges, in contrast to 1989, when only five had them (with limited equity and bond market trading). But today’s stock exchanges in Africa remain underdeveloped, with small market capitalizations, few listed companies, and less liquidity than exchanges in other emerging economies. The proceeds raised from initial public offerings (IPOs) in Africa between 2014 and 2019 reached $27.1 billion, less than 1.4 per cent of global IPO proceeds during that period.

From: Economic Report on Africa 2020