New York, United States, 4 May 2022 – Ministers from across Africa have called for accelerated fiscal decentralisation efforts to spur sustainable urbanisation as an enabler of inclusive growth and prosperity.

This was the overarching message from their joint statement delivered by Malawi’s Minister of Land H.E Samuel Kawale at the United Nations General Assembly’s (UNGA) high-level meeting on the implementation of the New Urban Agenda, held on 28 April in New York City.

In their statement, African countries noted that effective and sustainable urban planning was constrained by the slow implementation of fiscal decentralisation. Therefore, they appealed to the United Nations to provide additional support, particularly in the implementation, monitoring and review of decentralisation policies.

African countries in their group statement further said: “Whilst we are experiencing an unprecedented rise of urbanisation today, we are at the stage where we should rethink our strategies and consider our cities as solutions rather than the cause of the problems that we are currently facing.”

The group statement was informed by the Ministerial Dialogue on the African Urban Agenda, hosted by the Nigerian High Commission in New York on 27 April, attended by African ministers for works and housing. At this dialogue, ministers noted the need to establish innovative financing systems for sustainable urbanisation in Africa, including an Urban Development Fund Facility.

The dialogue was guided by the conclusions of a prior Special African Ministerial Session on Sustainable Urbanisation and Housing, convened on the margins of the High-Level Meeting for the Review of the New Urban Agenda on 13 and 14 April 2022. 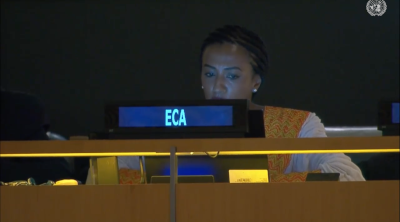 Speaking on behalf of the United Nations Economic Commission for Africa (ECA) at the UNGA meeting, Ms. Edlam Yemeru, acting Director of ECA’s Gender Poverty and Social Policy Division, said urbanisation is a megatrend that is rapidly rewriting Africa’s economic profile. She added that ECA has been supporting its member States to leverage urbanisation as an opportunity for sustainable economic growth, industrialisation, job creation and revenue mobilisation.

Ms. Yemeru continued: “This is being done through the prioritisation of urbanisation at the core of national economic policymaking and the strengthening of urban economic and financial data and statistical capabilities. As Africa remains steadfast in economically recovering from multiple exogenous shocks, we will continue to promote sustainable urbanisation as a necessary enabler of future resilience and prosperity.”

Contributing to the panel discussion, Mr. Lefu Manyakole, Principal Secretary of Local Government and Chieftainship, Kingdom of Lesotho, shared his country’s experience in developing a multi-sectoral action plan for the implementation of the New Urban Agenda with the support of ECA. The action plan will serve as an important tool for promoting sustainable urban development for poverty reduction, given its focus on creating jobs in the urban sector.

A summary from the President of the General Assembly will capture the key outcomes of the high-level UNGA meeting, which is expected to inform the continued implementation of the New Urban in Africa and around the world.